Japan is famous for its challenging elementary school system. Pupils not only have to rigorously study over 2000 kanji, but also undergo many hours of mathematics and clean the school’s premises. However, these efforts have paid off – at least if one looks at the surveys made by PISA. In the last decades Japan continuously ranks among the top countries on average performance in science, mathematics and reading. But no country is perfect and when it comes to the well-being of the pupils in terms of schoolwork-related anxiety the ranking is not as impressive, showing there’s still room for improvements.

Japan is famous for its challenging elementary school system. Pupils not only have to rigorously study over 2000 kanji, but also undergo many hours of mathematics and clean the school’s premises. However, these efforts have paid off – at least if one looks at the surveys made by PISA. In the last few decades Japan continuously ranks among the top countries on average performance in science, mathematics and reading. But no country is perfect and when it comes to the well-being of the pupils in terms of schoolwork-related anxiety their is cause for concern.

The Japanese elementary school system consists of six years of elementary school plus three years of middle school and after that follows three years of high school. After high school the now graduated student can choose to go to university, and according to MEXT (Japanese Ministry of Education, Culture, Sports, Science and Technology) around three out of four students decide to pursue a higher education. But what do you get in Japan by investing an additional four more years to complete a bachelor’s degree? And if you want to pursue a higher education, Japanese citizen or not, is Japan the right place to do it?

Difference between education in Japan and the West

A big difference many foreign students initially notice especially from the West, is that if a teacher asks “what do you think?” to a class of mixed students, the Japanese students don’t look to speak out; they look around and see if someone else talks. It’s not because of a lack in knowledge but rather how the schooling system in Japan shapes its students. They’re taught that they should listen and memorize rather than give their own opinions on something. But in the last decade Japanese students are becoming more globally minded, and the students who go abroad and become a little more internationally aware usually show more initiative during lectures.

Let’s try to make a deeper comparison between the Western and Japanese university’s cultures. To start with, the liberal arts tradition in the West is very different from the higher educational tradition in Japan. In the West the tradition is to develop the individual with critical thinking and depth of character through an exploration of knowledge. Higher education in Japan doesn’t have as much of the same liberal arts minded background. Traditionally in Japan it was, as in the West, the upper-class who went to universities and part of the educating was to culture. This historic background is more present in contemporary Japan today than in the West as there still is a strong sense of being a member of a certain community of educated members, which is strongly influenced by what university you go to. Another difference is that Japanese universities are much more about teaching communication skills. Not many decades ago universities weren’t concerned with teaching students

anything specific as there was another overarching goal: to make them work in teams, to make them talk with each other and to make them work on projects. When the students later would join a company, the company would teach them all they needed to know regarding the specificity of their particular business.

Another big difference with the West is that for the Japanese universities getting into the institution is in general the most difficult part of their educational system. The entrance exams are very competitive, but once you’re in, you’re an insider. It means that the demands the students face once they’re in are much lower. It’s not always what your major is, or the toughness of the classes that you take that matters; it’s the fact that you managed to get into a place that was very difficult to get into. And in Japan, which university you’re able to get into is of huge importance.

Getting in is hard, graduation is easy.

In the American universities you can’t be as relaxed once you get in, courses are in general tougher and there is no one assigned to help you. It’s more of a sink or swim system which can be tough if you don’t have people who can help you deal with it. It can produce some really great people, but a lot of people drop out. Japan, on the other hand, is less demanding individually but takes better care of the students.

In Japan it’s low risk, low return and in the US high risk, high return. 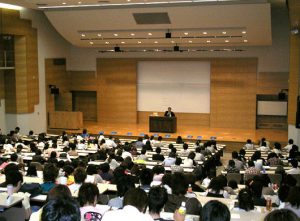 It may be difficult to compare both the US and the Japanese systems with Europe since many European countries are different. But some general features can be seen such that European education generally tends to start with high-level abstraction and work toward a specific application. Japan is kind of the opposite with teaching a lot of details from the start with the big picture emerging in the end. It’s top down compared to bottom up. In this picture the US concepts of higher education might fit somewhere in the middle as it’s more process-orientated in terms of cause and effect. Basically the Western university system is more oriented at creating specialists while the Japanese counterpart encourages communicative generalists. In the West there is in general fewer courses per semester, while in Japan students can take up over 10 subjects. But Japanese universities are good at what they do, and they do what the companies want them to. They don’t want specialists, they want people who are able to harmonize with others.

The causes of the difference Where doe these differences arise from? One reason might be that in Japan, you’re not always defined as much by who you are and what you can do as by your relations – “you” are “your relations” one could say. Japan is very much of a community to a community-based society with sharp borders between social groups. University life is not only about taking courses but also to participate in student clubs and learn how to create and manage relationships. In the West it’s more focus on developing yourself as an individual who has something unique to offer to others.

Some call the universities in Japan a “gatekeeper”, and it seems to be an accurate parable in many cases. The Japanese company assumption is that more competitive school have higher quality students, and as companies are less interested in individual expertise they preferably want students who are willing to work hard and work well with others. These they assume are found in the top universities. This also has deep ties to the infamous job-hunting procedures almost every Japanese student must go through during their last years at the university, and to make a long story short what job you’ll be able to get after graduation depends heavily on what university you went to. But Japan, as all other countries on the Earth, are changing and higher education is no different. Even though many universities and companies are clinging to the old ways, both how the universities are shaping the students and what kind of students the companies want are slowly changing.

Maybe one such change would be allowing students to fail. If the universities made slightly higher demands, the students would have to face more choices about whether to try hard or not; and if not, it could result in failure. But that’s not the whole world, learning how to handle and accept failure and trying again is also important. When people are not allowed to fail they learn to not make effort. While the American universities can be cold in the way it treats its students in this regard, the Japanese university has the opposite problem.