When Katrina Navallo first arrived in Japan in April 2016 from the Philippines with a lau...

When Katrina Navallo first arrived in Japan in April 2016 from the Philippines with a laundry list of tasks to accomplish, such as setting up a Japan Post Office bank account, moving into her new dorm room, and starting an Intensive Japanese Language program through the MEXT Scholarship program for 5 months at Kyoto University, she had no expectations of what was to come her way.

The Beginnings of a Love Story Soon thereafter, she became instant friends with three other folks in her Japanese course —two young women from the Dominican Republic and from Mongolia, and a final gentleman from Panama named Manuel. Quite the international group, they spent ~20 hours a week together in Japanese language classes, often studied together before exams, and even spent time on weekends together visiting UNESCO World Heritages and other famous tourist attractions in the Kyoto area.

Through this natural friendship, Manuel and Katrina began to see each other in a more intimate light. Due to their shared values, similarities in cultural, religious backgrounds and family values — as both Panama and the Philippines were colonized by the Spanish, it became easier to relate to each other on a deeper level. Plus, the couple came from a similar social background, and were both steadfastly pursuing their Ph.D.’s at Kyoto University. 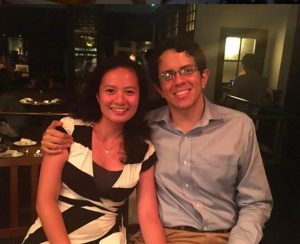 Most importantly, they were both at the right stage in their life to settle down, had similar life goals, and could effectively support each other’s life goals. And a critical point is that both were not afraid to settle down; rather, they viewed marriage as an enabling factor for a symbiotic, harmonious partnership. All the stars in the universe aligned to create this chance encounter, and because of their shared hopes and dreams in life, it became an adventure to plan their future together. One year from the time they met, this couple officially sealed the deal and became a lawfully wedded couple, where both families and friends flew to Japan to celebrate and welcome this new chapter in their lives. From randomly meeting in Japan and having the fortune to be in the exact same place, in the exact same time, Katrina and Manuel both knew it was more than mere circumstance, they chose to go on the same path together.

Once they got married, the couple made a goal of visiting a new place in and around Kyoto at least twice a month, reserving longer getaways for holidays. With this goal, the couple ended up visiting 4 new countries in 2017! Currently, the couple’s favorite place is Kinosaki, replete with its collection of onsens (Japanese spas), relaxing ryokans (or Japanese style inns), and delicious seafood Kaiseki — a traditional, multi-course, seasonal Japanese meal. Studying abroad in Japan, has not only provided Katrina with a partner in life and a Ph.D., but it has also opened her eyes to new concepts, new ways of living, and newfound appreciation of cultural uniqueness. Not only is the Japanese public transportation system extremely efficient, but it also provides easy access to nature. Plus, Katrina truly appreciates how integrated nature is in the daily life of Japanese folks, such as the beautiful Kamogawa River, and how disciplined the Japanese people are, as they are always on-time, and helpful.

On the flip side, as a foreigner, it is burdensome and nearly impossible to live up to all of the societal expectations. And she can feel the palpable constraints of Japanese society, even though the unwritten and implicit rules are not explicitly said out loud. Needless to say, Katrina believes there is a time and a place when it’s appropriate to conform to group-oriented, social norms, but there’s also a time and a place to have an independent and open-minded perspective and opinion.

As a result, in Japan, many people have multiple Twitter accounts — one for their personal, close-knit, and trusted friends; and one final one that is completely anonymous and a place for them to express their deepest, most honest thoughts, or their alternative personality. This phenomenon completely makes sense in a country that is laser-focused on maintaining group harmony and following the unspoken rules. And when Katrina and Manuel transitioned from single to married MEXT Scholars, they not only had to run around to a variety of administrative offices around the city, but they also had to legally register at the Kyoto City Ward Office and fill out countless forms. Plus, once they decided to move in together, they had to update their residence cards with the new address, provide the new address to the school, update the post office, and officially register their new address with the Ward Office. In Japan, running around to numerous administrative offices, and filling out limitless forms, is a fact of life. Sometimes, it can even feel like that’s all you are doing so for an entire day. Regardless, Katrina still finds Japan to be a captivating country that offers many unique and modern elements, alongside age-old traditions — a true blending of the traditional with the modern. Plus, she truly enjoys living and learning in Japan at one of the top universities in Asia.

Overall, Katrina’s advice is to GO FOR IT! By having a positive perspective throughout the process of applying for various opportunities, and enjoying each moment, you can set yourself up for success. And by applying for new opportunities, stepping out of your comfort zone, and trying new things, you can achieve more than you expect, and even fall in love.

Thank you very much for reading this article. Learn more about Katrina Navallo’s research topic in the previous article.