For students in Waseda University and Keio University, the word of “Sokeisen” must be familiar. “Sokeisen”, it means the Waseda-Keio rivalry relations for a long history. Today, let’s find out more interesting stories about the two top universities in Japan!

Waseda-Keio Rivalry, also known as “Sokeisen”, is a college rivalry between Waseda University and Keio University, the most two prestigious private universities in Japan. The word of “Sokeisen” is mostly be used towards the sports game, especially the baseball game between the two universities, but sometimes students also use this term outside the sports field.

The origin of Sokeisen can date back to the first baseball game held between Waseda and Keio in 1903. It was the time that baseball tournaments and sports organizations was undeveloped completely, so this game gained a huge popularity at that time.

After the competition, the Tokyo Big6 Baseball League was established. It is an intercollegiate baseball league that features six prominent universities in the Tokyo area, including Waseda University, Keio University, Meiji University, Hosei University, University of Tokyo, and Rikkyo University.

In the spring and autumn of each year, the six teams play eight-weekend seasons, and all games are played at Meiji Jingu Stadium. Since the origin of the Tokyo Big6 Baseball League comes from the Sokeisen, the series between Waseda and Keio will always be played during the last week of the season. In fact, the Sokeisen has a great influence to Japan’s baseball history; it attracts the most attention and is enjoyed by students.

Based on the data from the Tokyo Big6 Baseball League, Waseda University has won the league the most, with 45 league championships. 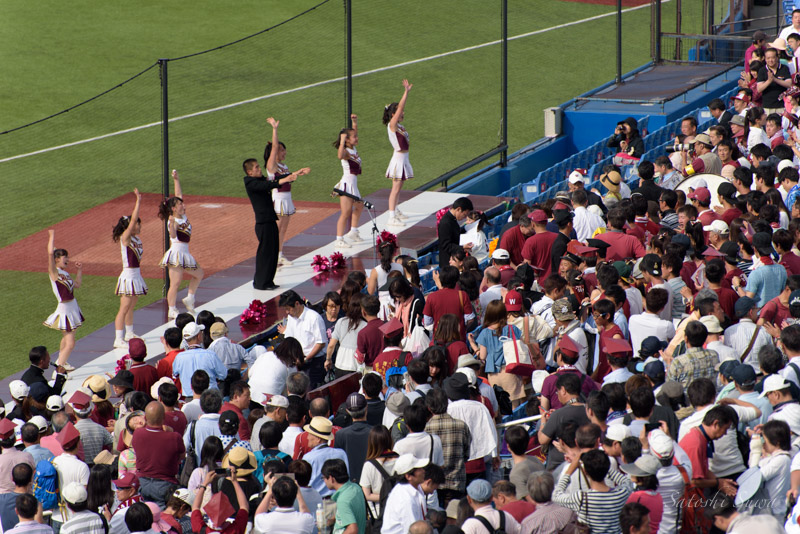 The cheerleading of Sokeisen is also famous. In every baseball game, there are performance to cheer on your team, in Japanese it is called the “Ouendan”.

The most famous fight songs for the Sokeisen are 若き血(Wakakichi), made by Keio in 1927 and 紺碧の空(Konpeki no sora), made by Waseda in 1931.

We can see a numbers of Soukeisen not only in  baseball game and cheerleading, but also in soccer, American football and so on. Soukeisen also exists in the academic field like the 囲碁(i-go), an abstract strategy board game for two players. Sometimes the events held by the university clubs and circles between Waseda and Keio will use the name of Soukeisen, too. In addition, Soukeisen can also be called as Keisosen.

There may be rivalry relations between two universities for a long time. But at the same time, for the students in Waseda and Keio, the Soukeisen is also a memorable experience in their university life.