Welcome to a 3-part series, highlighting Karthik Rampalli’s life. For those who didn’t read Part I about Karthik Rampalli’s arrival in Japan, or his experiences at Tokyo Institute of Technology, check out this article. If you are interested in learning more about Karthik’s experiences of co-founding the MEXT Scholars Association (MSA), working at various part-time jobs and internships, and organizing 5 TEDx events and 1 Hackathon, then read Part II.

Now get ready to learn about Karthik’s perspective on living in Japan and the benefits that come from it, and his overall appreciation and gratitude to those who helped him achieve everything he has accomplished thus far, as well as the MEXT Scholarship. And finally, learn some important clues to help make the best use of various opportunities in Japan.

Benefits of Living in Japan

Looking back over the past couple of year of living, studying, and working in Japan, Karthik feels like the language training was a major benefit for him. And one of the best decisions he ever made was to purchase a bicycle during his first year, so he could explore his new city, and his new home. At the time, he had minimal Japanese language skills. But with the little that he knew, he would apply his knowledge by asking Japanese people for directions. By biking around the city, he was able to get the best of both worlds — exploring his new surroundings and practicing his newfound vocabulary.

And through various organizations such as his university and JTB Travel Agency, Karthik has been able to venture to unchartered territories of Japan … at least for him. One of his favorite trips was a 12-day tour of Hokkaido, where his group did paragliding, kayaking, camping, and even strawberry picking. Plus, he enjoyed drinking the inexpensive and absolutely delicious milk.

Another one of his favorite trips was to an area called Gunma, where he saw the source of an onsen for the very first time in his life. On yet another trip, with an NPO called One Young World, Karthik was sponsored to go to Canada to learn about social entrepreneurships and pitch his own social entrepreneurship ideas — a trip that gave him many captivating ideas for the future. 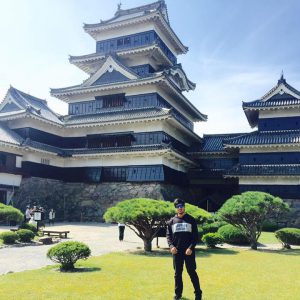 Overall, mastering the Japanese language to a degree Karthik is personally satisfied with was a major benefit for him. And the chance encounters he’s had while bicycling around Tokyo, asking Japanese folks for direction, has also been a delightful memory. Most importantly, his best memories all come from spending time with his good friends, classmates, and his professors.

He constantly reminds himself that without their ongoing support, he would not have been able to get this far.

Through traveling around Japan, Karthik has also gained immense appreciation for the full breadth of what Japan has to offer, ranging from thousands of years old temples to spectacular natural beauty. Even more, Karthik has easy access to delicious and healthy foods. In fact, one of his favorite foods is natto, or fermented soybeans that have a unique smell and are extremely sticky. While many foreigners can’t stand the appearance of it, Karthik has fallen in love with the highly nutritious protein, and has even tried edamame-infused natto.

Overall, living, learning, working, and studying in Japan, has thus far, been an unforgettable experience with many lifelong benefits. And Karthik fundamentally knows that he has made the best possible decision for his life by moving to Japan! Tips from Karthik — What Worked for Him

Overall, Karthik feels that Japanese people are very kind and encouraging. Not only is he invited to participate in engaging activities, but he is also constantly meeting new folks who are brimming with energy and enthusiasm. These activities have helped Karthik remain productive and happy.

And by remaining active, Karthik has been able to work at 2 different internships as well as Tokyo Tower and UNIQLO, helped found the MSA organization, and organized 5 TEDx events and 1 Hackathon thus far. Plus, he’s built a strong social network, with whom he travels and explores new areas in Tokyo. All of these “accomplishments,” were based on his ability to work smart, meaning that he leverages the allotted time that he has to complete a given task, crafting a quick plan on how to most efficiently complete a project, while maintaining high standards, and by automating as much of the manual process as possible. By working “smart,” Karthik has been able to successfully accomplish all of his tasks.

When Karthik uses time efficiently, refrains from succumbing to manual tasks — instead, opting to automate them, and by making strategic plans before he gets started, he has been able to make the best use of his past 3 years in Japan.

For those who plan to study Japanese, Karthik encourages them to never give up. Slowly but surely, one will become more familiar with the hundreds of Kanji characters, and living in Japan will become that much easier. In fact, in the very beginning, Karthik recalls going to a convenience store, and being unable to tell the difference between yogurt and milk. Thus, learning the basics of Hiragana and Katakana characters, became an absolute necessity.

Karthik studied diligently, mastering the 2 alphabets of Hiragana and Katakana with 26 characters each, soon after arriving. Then, he began diving into Kanji characters. Little by little, the breadth of his Japanese vocabulary, Kanji characters, and grammar rules, began to expand, making the entire experience of living in Japan, all the more meaningful and profound.

And by working “smart,” he figured out more natural ways to learn more, such as speaking with as many Japanese people as he could in supermarkets, at school, at networking events, and much more. Plus, Karthik already had the advantage of speaking 3 languages — English, Hindi, and Telugu — before coming to Japan. Even more importantly, the sentence patterns in Sanskrit, paralleled that of Japanese. Once he figured that out, he was able to focus more on learning as much Kanji as he possible could.

To conclude, Karthik’s advice for those who want to study, live, or work in Japan, is: Thank you very much for reading this article about Karthik’s part-time roles, volunteering experiences of organizing TEDx and Hackathon events, co-founding the MEXT Scholars Association (MSA), the benefits of living in Japan, his appreciation and gratitude for the MEXT Scholarship, and the advice Karthik has for those who may want to follow in his footsteps.

Check out Part I about Karthik’s arrival in Japan, why he moved to Japan, his one-year intensive Japanese language studies, and his favorite things about studying at the Tokyo Institute of Technology (Tokyo Tech). And in Part II, learn about Karthik’s experiences of co-founding the MEXT Scholars Association (MSA), working at various part-time jobs and internships, and organizing 5 TEDx events and 1 Hackathon.