Keio University is offering 24 different English Degree programs which are mostly getting full degree and require at least 2 years participation. In addition, there are also 3 different programs for only 1 year Exchange studies. Before going into detail for each of them, let’s start with “Why should you choose Keio University?” Well, there are 5 main reasons.

Keio University is offering 24 different English Degree programs which are mostly aimed at retrieving full degrees and require at least 2 years of participation. In addition, there are also 3 different programs for only 1 year worth of exchange studies. Before going into detail for each of them, let’s start with “Why should you choose Keio University?” Well, there are 5 main reasons. 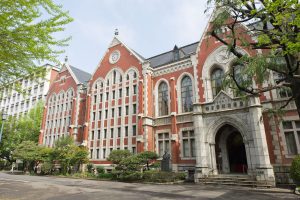 One of the most important things you need to consider while choosing school is location. Keio has 10 different campuses in Tokyo and Kanagawa. The main campus is in Mita, which is at the center of Tokyo. As an exchange student, all your courses will be in that campus. It has that famous library building, which is the first thing that pops up if you google Keio University. This gothic, red-brick library built in 1912 is a symbol of Keio University for more than a century. It is recognized as an Important Cultural Property by the Japanese Government. That vintage ambiance makes you feel like you are in a Harry Potter movie!

Japan can be very challenging as a foreigner, especially if you don’t know the language. First of all, it’s a very homogenized country, only 1% of the population being foreign. Keep that in mind, don’t expect English speaking tourist-friendly people everywhere. You’ll get attention on the streets and trains because of your different appearance and the mother language you speak, and not everyone will be fan of you. In that aspect, Japan is not even comparable with Europe or USA. Therefore, having an internationally friendly atmosphere is extremely important. Keio is one of the most international student accepting universities in Japan. It has more than 300 international partners all around the world and offers more than 800 classes in English.

Outside of the classroom (and your dorm room), a fulfilling campus life awaits. There are over 400 clubs and societies run by students for all kinds of sports and interests. Make sure to attend one of the popular sports events put on by the Keio University Athletic Association, which currently has 43 official clubs and teams. Don’t forget to join one of Keio’s student-run campus festivals, which are key highlights during the academic year and held annually on each of Keio’s campuses as some of the largest student events in Japan. The most famous one is Mitasai (Mita Festival) which are held annually the last weekend of November. This year it was 59th and around 400 groups took part by inviting leading figures in various fields to give lectures as well as organizing seminars, research presentations, and exhibitions in the classrooms. Numerous food stalls were set up in Mita Quad and the outdoor stage featured many elaborate performances, such as dance routines and live bands. Mita Campus was also in peak autumn colors thanks to the golden ginkgo trees and the campus was crowded with visitors, filling the air with excitement. (Metropolitan Area) according to 2017-2018 University Brand, image survey (Nikkei BP Consulting Inc) (only in Japanese). Besides from these numbers, Keio is one of the most prestigious universities in Japan. When somebody asks you which university you’re going to, and you answer as “Keio University”, the expression you’ll get is “ええー頭がいいね！(Ee… Atama ga iine!) ” which means basically ‘Wow! You’re smart!’. Well, it’s good to know how to answer this honorific greeting, you should say in a very modest way: “たまたま縁があって！(Tamatama en ga ate!)” which means “unexpectedly with the help of destiny…” (This deep insiders’ information, you can’t find anywhere else…)

Keio alumni can be found in almost any profession, from politics and public service to industry, academia, medicine, and the arts. Some of the most famous alumnis are Junichiro Koizumi (the 87th Prime Minister of Japan from 2001 to 2006), Shigeru Ishiba (the Minister for Overcoming Population Decline and Vitalizing Local Economy 2014-2016),
Akihiko Hoshide (JAXA astronaut who became the third Japanese astronaut to walk in space) Katsuaki Watanabe (He was the CEO of Toyota Motor 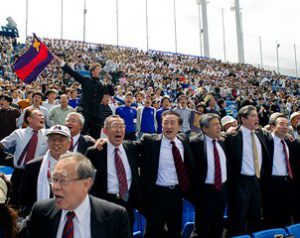 Keio alumni stay connected through Mita-kai, voluntarily formed alumni associations that can be found all over the world. Organized by year, region, and occupation, Keio currently counts more than 870 Mita-kai. It is high probable that you’re going to find an alumni currently working at the company that you’ve applied to which means the odds will be in your favor!

Well, after all these considerable reasons, I highly recommend watching this inspirational video as well! Now, let’s take a look at Exchange Programs in Keio University. 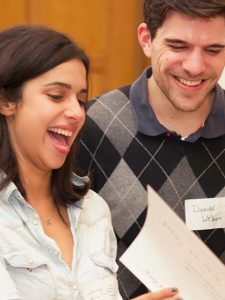 In this program, you can study about Japan and East/Southeast Asia by taking English-taught courses offered by the International Center. In addition, you may choose to take up to four Japanese language courses each semester. If you have advanced Japanese proficiency, you may even take undergraduate/graduate school courses in Japanese offered by faculties open to exchange students. You need to take at least 7 courses in each semester. There is a great range of variety that you can choose courses from, you can take a look at from here. skills. The curriculum is designed to assist students in attaining the high level of Japanese proficiency required for research and other academic activities in specialized disciplines.

The Main Course, which is the core of the Japanese Language Program, is characterized by having a broad range of subject options. Students are able to choose any subject of their interest appropriate to their level from Japanese language subjects and other subjects related to Japanese culture. There are different levels and at the beginning of each semester, there is a placement test to appoint you an appropriate level.

This program aims at the ones who wish to conduct research under the supervision of an academic advisor at Keio University. You must be enrolled in a graduate school (or equivalent) at your home institution to be able to apply. Then you must receive approval from the graduate school for admission to the program as research program students. Moreover, Keio University only accepts exchange students at the graduate level when there are suitable academic advisors available for students’ research plans. Although there are more than 2,250 full-time university faculty, there are also more than 33,500 students which makes the student-to-faculty ratio 15 to 1. It is better to make sure there is an available academic advisor for your research plans before making further arrangements.