Part-time jobs are an integral part of economies all over the world; the demand for a fluid workforce that can engage in simp...

Part-time jobs are an integral part of economies all over the world; the demand for a fluid workforce that can engage in simple labor at short notice for an undecided period of time can be found anywhere. Part-time work is exceptionally common in Japan, where many students engage in part-time jobs for a secondary income.

College students working late-night shifts at convenience stores or serving tables is a common sight. But Japan has several unique features that define its part-time jobs; it is to little surprise that some students even go so far as to rely exclusively on part-time jobs for their financial income.

The most distinctive feature of Japan’s working environment is its pay. Since many part-time jobs require little professional training or university education, workers are usually paid the minimum wage. Yet Japanese minimum wage remains high among OECD nations because of its continuous increase; the amount has seen a relatively stable growth rate from 2010 to 2018, and now it marks a record-high of 848 JPY per hour.

Acquiring a job is also relatively easy. Since most require little experience or skill, applicants only need to go through a single, and rather informal job interview. Opportunities for part-time jobs arise in a variety of situations, ranging from official job-hunting posts to personal recommendations from acquaintances or friends. Even foreign students can find part-time work as long as they have the special government-issued labor permit known as “Shakugan katsudo kyoka”.

Although there are a wide range of working environments even within one category of waitressing. Baring in mind that not all part-time jobs overload their employees, there is still a strict working culture in Japan, which may be seen as more of a ‘harsh’ working environment compared to other cultures.

Nonetheless, the process of getting a job and working whilst being a student is not always positive. Mun-Su Park, a South Korean college student, details a negative personal experience of working at a part time job in Japan. Park has worked a variety of jobs throughout his time in Japan, his most recent endeavour being a cashier at a pharmacy. Although this is an extreme case, he remembers his job interview very clearly. “I had found the job through a job-hunting website, and my interview was crazy. They made us stand outside and shout slogans to see if we were extroverted.” He laughs as he recounts how he had to shout the loudest to get the job. 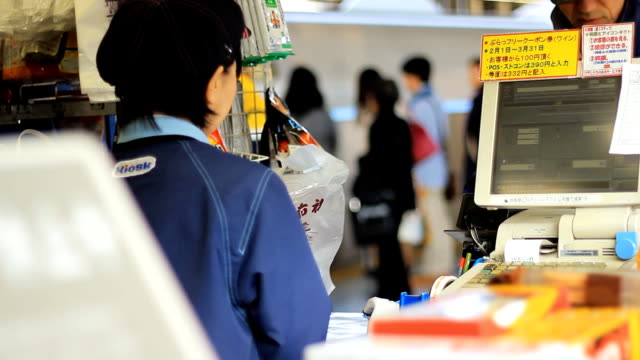 Park received 1280 yen per hour, a high rate for a part-time worker. However, there is a price to pay. “The hardest thing about my job is that you have to keep working, no matter what. Even if there were no customers, we had to keep shouting slogans and mottos. Otherwise, the manager would come and scold us.” He remarks that sometimes the surveillance amounted to a nearly intolerable level. “They would watch us using CCTV to see if we kept doing something. And if we made a mistake, they would instantly know. That’s why I quit,” he notes with exasperation.

Due to the temporary nature of the job, it is hard for part-time employees to gain proper job security or protection, and some workers do face similar conditions. In a survey conducted by the Ministry of Health, Labor and welfare 60.5% of Japanese students responded that they were not satisfied with their working environment, either due to being overworked or unreasonable demands from their employer. The survey exemplifies a larger problem throughout Japanese society, in which part-time employees regularly face injustice. It is extremely difficult for said employees to resist such treatment however, due to the high employee-turnover rate and the lack of unions for short-term employees.

The problem only complicates the larger issue of Japanese labor shortages, which are forcing the government to seek an alternate workforce. The rising demand for competent workers due to its shrinking population, coupled with Japan’s high wages, has attracted a number of foreign immigrants from countries with detrimental living conditions. Foreigners working graveyard shifts or serving jobs is now a common sight, with immigrants constituting two to three percent of the Japanese working population. The foreign ministry expects up to 47,000 new workers coming from outside Japan if immigration laws are revised as planned. Unfortunately, uneducated immigrants who work part-time jobs in order to make a living for themselves and their family face even harsher treatment.

These cases show that both students and foreigners are in a vulnerable position, and they can be easily exploited in the name of part-time jobs. The approachable nature that makes these jobs so appealing in the first place is what is essentially the fundamental reason for such tragic realities; social discourse on how to protect these workers while maintaining the fluidity of the workforce is much needed in modern day Japan.