While the Japanese g...

While the Japanese government has welcomed tourists to Japan with open arms, foreign workers who want to work in Japan have faced several barriers and setbacks in the past. Japan’s population has consisted of mainly ethnic Japanese individuals, and it seems that, in such a conservative society, most nationals had preferred it to stay that way.

For the longest time, Japan had one of the strictest immigration policies in the world. Its lack of diversity was what allowed the culture to remain untouched and unchanging. The government faced pressure from both businesses that needed more workers and citizens who attributed the peace and harmony in Japan to its lack of foreigners.

In previous attempts to increase the labor supply in Japan, campaigns encouraging women and elderly had tried to promote participation in those industries. Businesses had fought to increase the retirement age in order to keep an adequate labor supply. But these private efforts alone were not enough to fill the needs of Japan’s rapidly advancing  society.

In addition to such public pressures, Japan’s ageing population and its impending labor shortage urged the governmental sector to take some actions. On April 1, 2019, Japan created a new visa system that would allow blue-collar workers from overseas to enter the nation more efficiently.  This major policy shift from the nation’s traditionally strict immigration rules was a game-changer that brought immediate positive results for Japan. According to government data released in a 2020 Kyodo News article, the number of foreign workers in Japan hit a record high of 1,658,804 as of October 2019. This was a 13.6% increase from the previous year!

To see how impressive this data is, one can refer to an article by the Nikkei Asian Review (2018), which states that Prime Minister Abe set a goal to attract more than 500,000 foreign workers by 2025. This goal has been already been accomplished as of 2020 with an astounding numerical data that is triple that of the original intension.

If the Abe administration continues accepting more low skilled workers, with a positive impact, it could change the immigration stance in Japan. While this is an extremely controversial topic in Japan, it has become an economic project for the prosperity of the nation. In order for Japan to continue to be on the cutting edge of technology and global leaders, increased immigration must occur, even if it’s starting at the bottom with low skilled workers. Every structure needs a good foundation, even metaphorical ones. 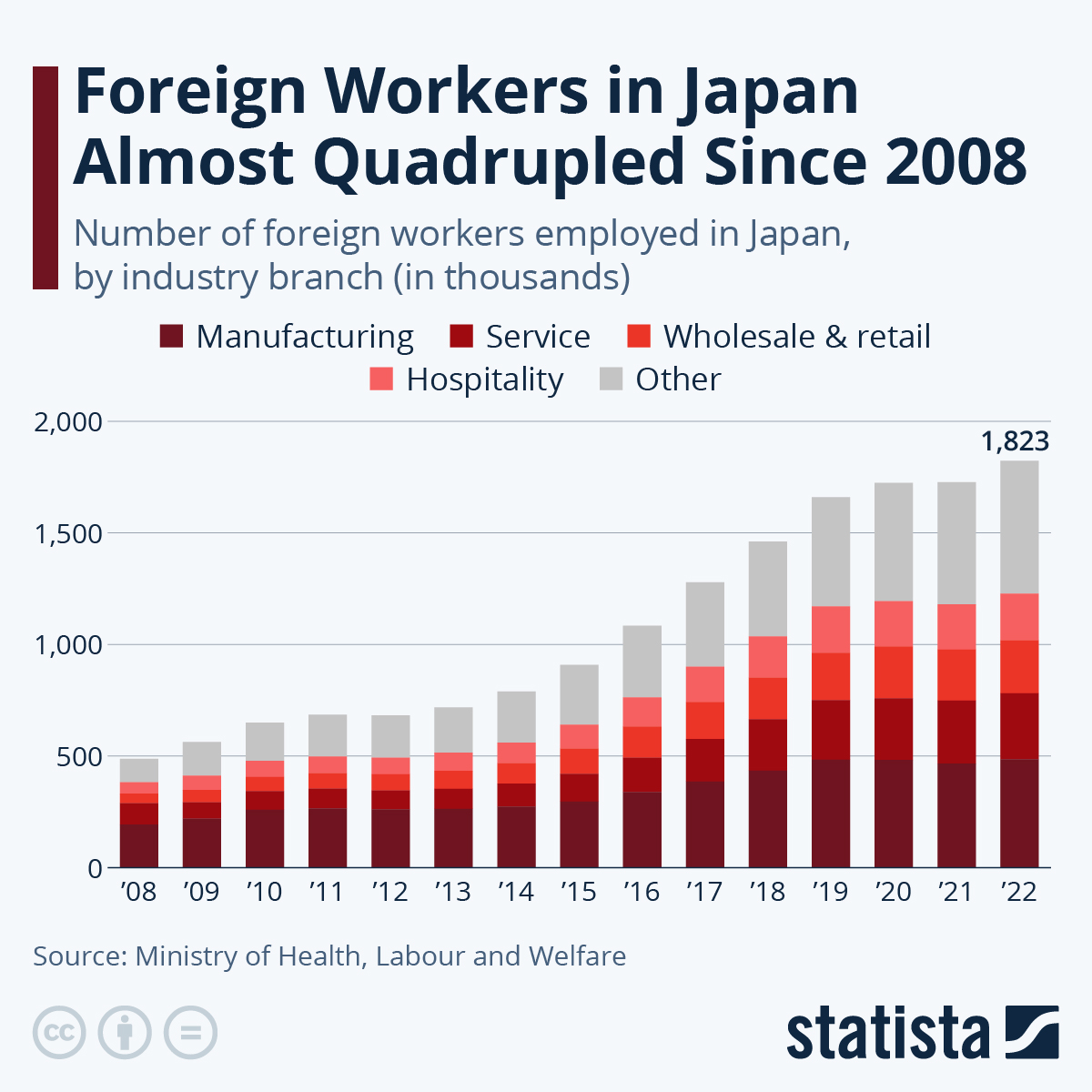 Chart by Statista, found at https://www.statista.com/chart/16838/number-of-foreign-workers-in-japan/.

Only time will tell the long-term impacts of the new work permit, but the foreshadowed effects of the ageing population are certain. With this new immigration policy, it is becoming easier than ever for foreign workers to find jobs in Japan!